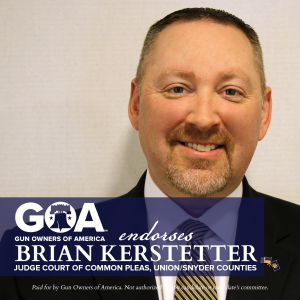 Brian is humbled to have received the endorsement of the vast majority of practicing and retired attorneys in Union and Snyder Counties.  Those attorneys are as follows:

“To the Voters of Union and Snyder Counties:

I come to you to give my endorsement of Brian Kerstetter for Judge of the 17th Judicial District. I highly recommend that you cast your vote for Brian.

I am sixty-five years old and in my thirty-sixth year as a practitioner in Union County. This is my twenty-sixth year as the District Attorney of Union County. I started out as President Judge James F. McClure’s first law clerk and then practiced with Peter Matson for ten years. I have committed my life to the well being of the justice system in the 17th Judicial District and can say without limitation or hesitation that Brian Kerstetter should be the next Judge of our counties.

I have known Brian as a friend and colleague for over twenty-five years. I have observed him as a young man through his college and law school years into his time as a young practitioner and now as a seasoned private practitioner and prosecutor. He has become an experienced lawyer in all areas of private practice and given great public service as an Assistant District Attorney. It has also been my pleasure to watch him become a husband and father. I have often sought his opinion and counsel on serious matters and have never been disappointed.

Brian possesses the life experience, professional experience, legal knowledge, diverse skills, fairness and work ethic as well as the morality and personal and professional ethics to be the next Judge of Union and Snyder Counties. I endorsed Brian when I moved for his admission to the Pennsylvania Bar in 1999 and it is my honor to endorse his candidacy for Judge now. I humbly request that you vote for Brian Kerstetter for Judge of Union and Snyder Counties.”   D. Peter Johnson, District Attorney of Union County.

The following individuals and business owners have also endorsed Brian’s campaign for Judge:

“Attorney Brian Kerstetter possesses all the right qualities that make him the right choice for Judge! From the moment I was first introduced to him, I knew I could trust him to handle my legal concerns fairly. Brian is smart, compassionate, level headed and strong in his convictions. He doesn’t sugar coat his opinion to be liked. He is a man with integrity and tells it like it is! Throughout the years I have known him, I have continued to see a highly dependable, community-minded professional who works tirelessly to make a difference. I have no doubt he is the best candidate for Judge and he will definitely have my vote on election day!”  Jerilyn Katherman, EXP Realty

“Brian has represented me both professionally and personally on various legal matters over the years.  I also have the opportunity to work with Brian quite often on helping residents of Snyder and Union counties with legal matters where our business services align.  Brian is always fair to consider all parties’ interests and perspectives regardless of the situation at hand.  I never hesitate to refer my own business clients to Brian when they are seeking an attorney as I know he will treat them with respect and dignity.  I would be remiss if I didn’t say I will certainly miss working closely with Brian but I know his passion for the law would best serve Snyder and Union counties with Judge before his name.”

“I am honored to endorse and support Brian Kerstetter in his bid to become the next Common Pleas Judge in the 17th Judicial District in the Commonwealth of Pennsylvania.

I have had the pleasure to have worked beside Brian during my 25 year career with the PA State Police when I was a Trooper stationed at the Selinsgrove barracks.   Brian has always been a pleasure to work with.  His knowledge, character, skills, and integrity are second to none.   I have witnessed Brian prosecute cases in the Court of Common Pleas on numerous occasions.  Brian has always showed empathy to the victims of the crimes he was prosecuting.  His knowledge and guidance to law enforcement ensured that cases were complete, and all elements of the crimes were covered.  Brian was also fair and reasonable when dealing with violators and defense attorneys and always ensured justice was served and served fairly for all parties involved.

I am confident that Brian would be a fair and impartial Judge.  He will ensure the scales of justice remain balanced for all parties that come before him.   Residents of Snyder and Union Counties can be assured that Brian will always treat everyone before him with respect and dignity and will rule within the Laws of the Commonwealth of Pennsylvania. ”